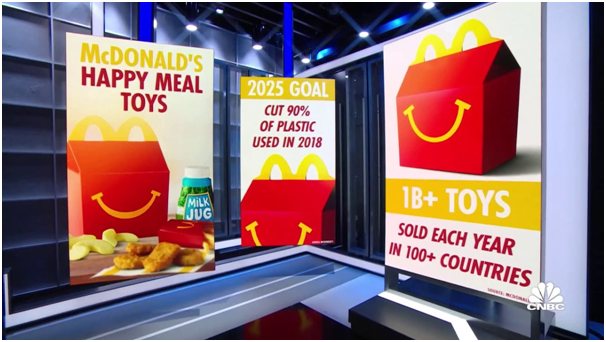 McDonald’s is pledging to offer sustainable Happy Meal toys made with dramatically less plastic by the end of 2025.

it would have substantially reduced the use of plastic in the more than 1 billion children’s toys it sells each year internationally. The modification entails replacing a plastic figurine of Batman, for example, with one composed of a dozen cardboard parts that children can assemble themselves. McDonald’s has stated that more toys will be manufactured from recycled or plant-based plastics. The modifications will help the Chicago-based firm reduce its usage of virgin fossil fuel-based plastic for Happy Meals by 90% compared to 2018.

More than 100 countries worldwide sell Happy Meals at McDonald’s locations. The burger chain began selling the meals in 1979. In 2018, after widespread concern about children’s meals at fast-food restaurants, the company revamped its options to selections that were lower in calories, sodium, saturated fat and sugar.

McDonald’s chief sustainability officer Jenny McColloch said the company has already been learning from feedback in France, the U.K. and Ireland, where the toys have already rolled out. The goal is to make sure they are safe and sturdy enough for children.

The newer options will also be “cost neutral” for franchisees because the effort was designed with the existing price in mind, Murray said. In the past, lower-plastic options have included Pokemon cards and books.

According to McColloch, the more sustainable toys will begin rolling out widely in the U.S. by January.

The fast-food giant is also looking for ways to recycle the old plastic Happy Meal toys within its restaurants. Its locations in the U.K. and Japan, for example, have reused the plastic for playgrounds and restaurant trays.

Walmart+ individuals get first dibs on Black Friday bargains, which will begin toward the beginning of November