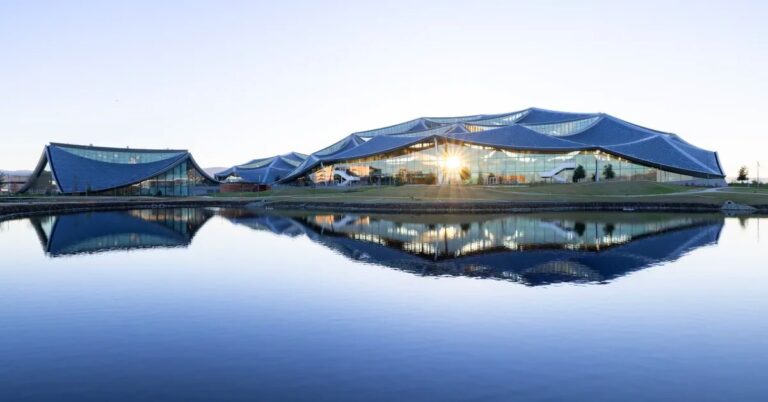 Recently, Google has finally opened its Bay View campus after revealing its initial plans for the same in 2013. Google’s Bay View campus has the most interestingly noticeable thing about it—the dragonscales.

After announcing its initial plans for the new facility back in 2013, Google has finally opened its Bay View campus to employees almost 10 years later. It is the first Google campus the company has developed itself, and it definitely doesn’t look like the traditional offices you’re used to. One of the first things you’ll probably notice about the new HQ, for instance, is its roof that looks like dragon scales from afar.

This ‘dragon scale skin’ design is actually made up of 90,000 silver solar panels capable of generating almost seven megawatts of energy, or up to 40 percent of the new offices’ energy needs. Wind farms nearby will also provide the energy needed to run the all-electric HQ that has two kitchens equipped with electric equipment instead of gas. In addition, the campus has automated window shades to let a lot of natural lighting in during the day and a ventilation system that uses 100 percent outside air.

The new campus also houses the largest geothermal installation in North America that will help heat and cool the campus without the use of fossil fuels. It even reduces the amount of water used for cooling by 90 percent. This geothermal pile system uses pumps to absorb heat from the ground during winter time and to send heat into the ground in the summer.

Google only recently started transitioning its workforce to a hybrid work schedule that would require employees to work in its offices a few times a week. Google’s Bay View HQ’s natural lighting, greenery and wide-open spaces could help make the transition easier for people who’ve been working from home these past two years.

Your cloud IoT stage should screen IoT endpoints and occasion streams, examine information at the edge and in the cloud, and empower application advancement and organization.