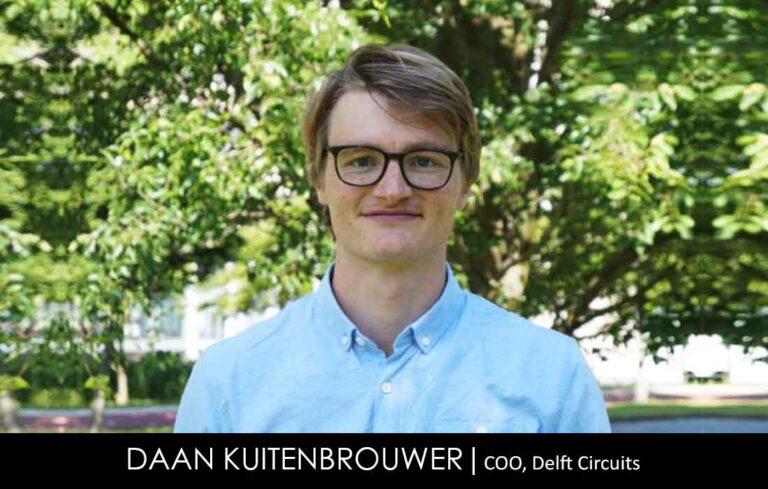 Delft Circuits is a company developing, producing and selling i/o solutions (cabling) for the quantum industry. Quantum engineers building world-changing setups to reach unprecedented computing or unhackable internet work with tools that were not made for this industry. Its first step is to provide cabling that is easy to work with and has optimal performance for high-frequency signals at extremely low temperatures (the environment of the quantum setups). The company’s vision is to build increasingly more tools for the quantum industry enabling these technologies to reach their potential, faster.

Delft Circuits’ Cri/oFlex® product line is a flexible and flat cabling solution for high frequencies at low temperatures. It is optimized to fit in densely spaced environments and reduce thermal coupling between different temperature stages. For the production, a combination of technologies from various industries is used.

Daan Kuitenbrouwer is the COO of Delft Circuits. Within Delft Circuits, he focuses on strengthening the company’s team (HR) – which the organization considers the most important asset of the company. Next to that, Daan is responsible for sales and the company’s sales network. In that role, he is also involved in business development, which serves as input for the company’s technical development. Daan has a background in physics and innovation studies which gives him very clear insights into the development of the industry and how to address opportunities coming up.

The company’s product is completely new in the field of quantum technologies. Its first product on the market substitutes regular coax cables. Its follow-up product – multichannel cabling to bring high numbers (>1000) signal channels to the quantum setup is completely new in its kind. At a certain point (300 – 1000 signal channels, depending on whom you ask), it becomes impossible to bring more signal channels to the quantum experiment with coaxial cables. This is the case since these cables are too bulky (taking up too much space) and they conduct too much heat, causing the system to heat up and malfunction.

The first product Delft Circuits aimed at developing was cabling for quantum computing. The company saw it as its task to make cables at the length of a dilution refrigerator (the fridges that cool down the quantum processors to the lowest of temperatures), which is about 120 cm (depending on the type of system). Also, the organization wanted to make multiple channels per flexible ribbon. The journey to get there was quite long.

However, after its first prototype was developed in January 2017, it decided to show its product at the APS March meeting (the biggest physics conference in the world). At that conference, the team met several people who said they were very interested in a much simpler version of the product, namely a short cable (30 cm) and only a single signal channel instead of 1000s. This drove the team to first nail the development and sales of these precursor products. This is where the company is now, having its first products on the market and shaping up for the development of the cabling for large-scale quantum computing.

The company visits various conferences to meet companies building equipment as well as engineers and researchers in the lab. Also, it is in the midst of setting up its sales network of strong players in the field. Lastly, Delft Circuits aims to gather a lot of relevant information for cryogenic (low temperature) high-frequency cabling on its website and actively attracts people to its website to share knowledge and show its solutions.

As said Delft Circuits is shaping up to develop high channel density cabling with signal conditioning (e.g. filters and attenuators) components on flex. It plans to do so with big players in the field of quantum computing to keep the company’s design cycles short and its pace of development high.

In the long run, Delft Circuits aims to become a provider of various tools for the quantum industry. In that regard, it focuses on developing products that are relevant for most of the quantum industry. The company sees a lot of similar development going on in both quantum internet and quantum computing with regard to electronics – both go to increasingly higher numbers of interconnects for photon detectors and qubits respectively.